If you’re anything like me you have a love-hate relationship with school holidays.

Whilst I love not having to make school lunches and ship off the kids every morning by the time the second bell rings, I do so miss the routine and the few hours of time that I usually do things without the kids (or at least with just the littlest).

It’s also a battle of the screens. You want to give the kids a well deserved break from school, and let them have at it with technology, but you don’t want to lose them to the monster of the screen. You know, the children that turn into unrecognisable monsters when you say “time’s up” or “break time”…don’t tell me that’s only my children!

Today we went and saw The Minion Movie. Cute. Funny. Completely kidcentric!!! When we came home I knew the kids would all want to jump onto their iPads, or tablets, or PSwhatevers, but I had a trick up my sleeve. Last week on a Facebook post I saw a recipe for two ingredient moon dough. Curious, I clicked and read how easy it seemed. I’m linking to this post because I can’t remember the FB one I clicked!  All you do is add in some hair conditioner to cornflour and ‘presto’ ..moon dough. I didn’t quite believe it could be that simple. Until I did it!

What a great, clever idea! Here’s what you do:

Mix in a bowl until

a ball is formed – hand over to child and watch them mould, fold, stretch, and shape it! It was so simple AND it smelt so good (because I used apple scented conditioner).

It gave the kids some time away from the screens (I

think the first sitting was 45 minutes), and once I packed it into a ziplock bag, they came back to it later and played again. They used knives to slice it. Cutters to shape it. Hands to mould it! It was a great activity that didn’t cost anything (because we had the ingredients in the house!) AND there were no complaining about not being on technology!

So, next time you’re looking for a simple time out from screens activity, give it a try! Sometimes it truly is the simple things in life that are the most fun! 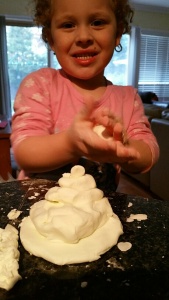 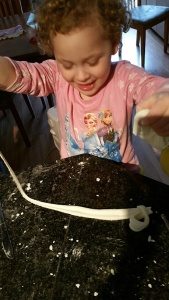 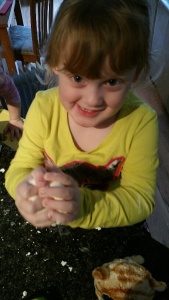 I'd love to hear your thoughts Cancel reply

Read All The Old Stuff Here!

Cool Blogs to Check Out!

Thoughts You Didn't Ask For
writingthedreamblog

The Fantastic and Mundane Chronicles of an Aspiring Writer

Show This Book Some Love

Reviews of a Bibliophile

Musings and books from a grunty overthinker

Scattered book reviews from a Scatterbooker

she is sunflowers & thunderstorms

The Adventures of an Erotica Author (18+)

Tales from the mouth of a wolf

What are your secret obsessions.... lets all find out Books, books and more books

4 out of 5 read-ologists recommend this WordPress.com site. ups and downs of writer's insanity and day to day life. I will write whatever makes the voices happy, for a writer that ignores her inner voices is merely a mental breakdown waiting to happen. Keeping the voices happy and creating new worlds for them to play in is my main goal.

Love in the Unexpected. Sweet romance where a happy ending is a sure thing.